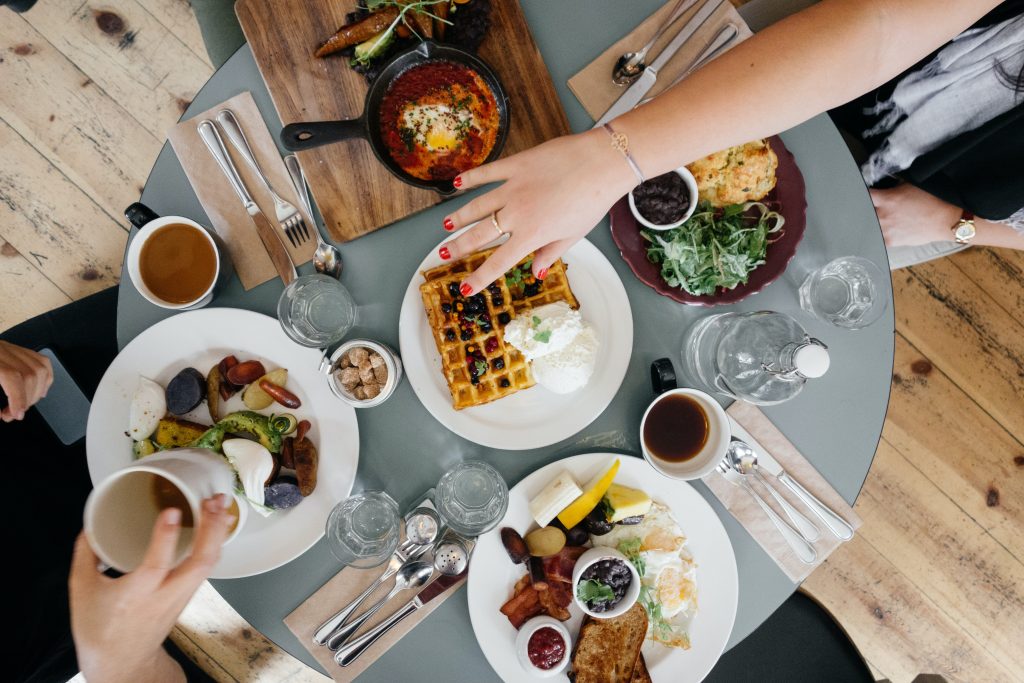 I get asked all the time what is intutive eating and who intuitive eating is for.  Short answer – almost everyone!

Long answer – I’ll drop a bunch of science below but of course in language you can understand!  It’s funny because most people think of intuitive eating as eating whatever they want, whenever they want and pretty much “giving up” on their health. 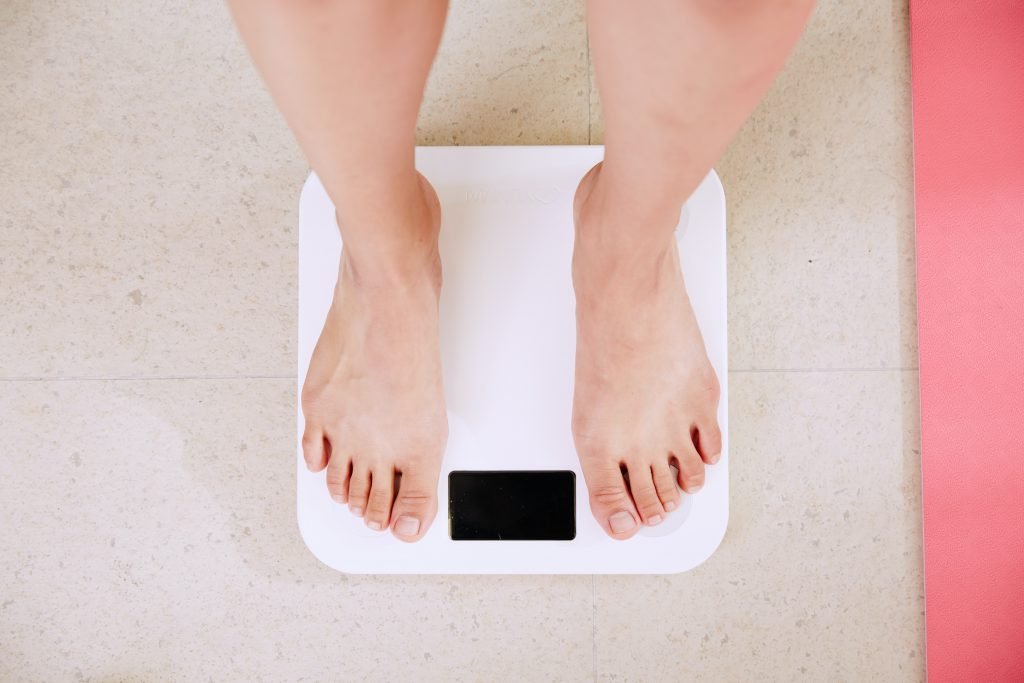 Intuitive eaters have actually been shown to have lower body dissatisfaction and lower weight bias internalization.  Most diets do the exact opposite.

What is Body Dissatisfaction? – “Body dissatisfaction develops when people have negative thoughts about their own body image and when people begin to define their own self-worth based on their negative body image, a number of mental health issues can arise, including eating disorders.” – Walden University

What is Weight Bias Internalization? – “Weight bias is defined as a negative attitude towards, and beliefs about, others because of their weight.  Their negative attitudes are manifested by stereotypes and/or prejudice towards people with overweight and obesity.  Internalized weight bias (IWB) is defined as holding negative beliefs about oneself due to weight or size.” – World Health Organization

Have you ever thought that you might be more successful in your career if you lost weight or a better mother if you lived in a smaller body?  Those are examples of weight bias internalization!

Blood Pressure Definition – The pressure of the blood in the circulatory system, often measured for diagnosis since it is closely related to the force and rate of the heartbeat and the diameter and elasticity of the arterial walls. 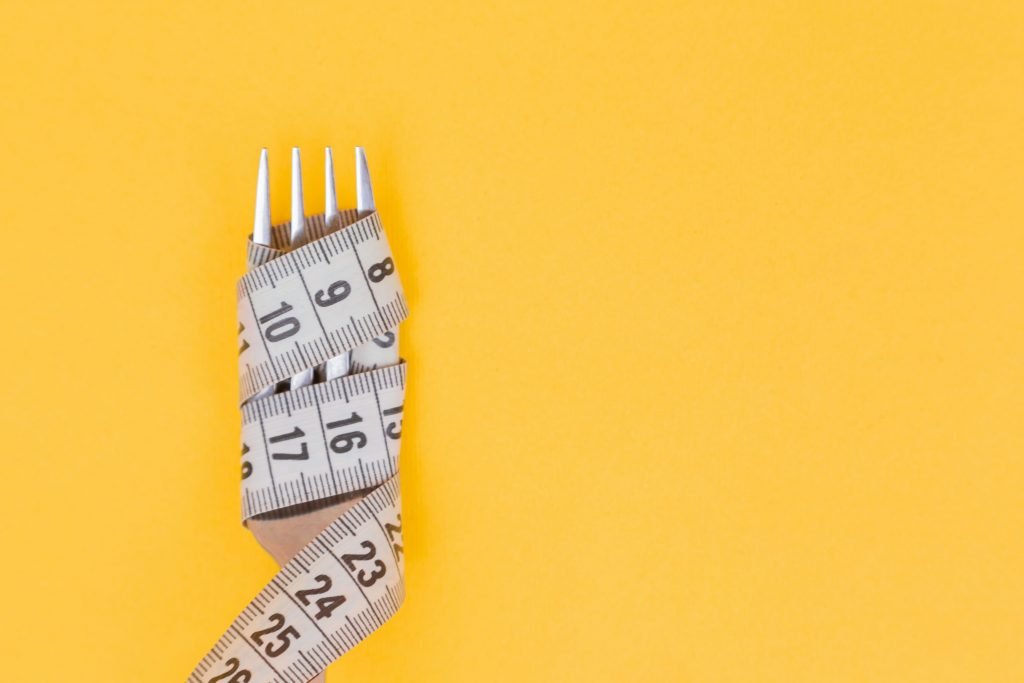 Guess what?!  Intuitive eaters are shown to binge eat less and have less loss-of-control eating!

How fascinating is that?

Binge Eating Definition – The consumption of large quantities of food in a short period of time.

Loss-of-Control-Eating Definition – LOC (loss-of-control-eating) is the subjective experience of being unable to control what or how much one eats, regardless of the amount of food consumed.

I started this blog out by mentioning how many people believe that intuitive nutrition is getting to eat whatever you want, whenever you want and however much you want.

How interesting that eating intuitively actually lessons your change of binge eating and loss-of-control eating!

When I take on a new client, I always get them to fill out a few worksheets in which one question reads, “do you fear that if you gave yourself permission to eat any and all foods, that you would never stop?”

Majority of the time they answer yes.

It’s interesting how diet culture has taught us to fear food and to not trust our own bodies around food.

Meanwhile if we actually just tune into our bodies once again, they will actually help us gain control of both binge eating & loss-of-control-eating! We will be able to grow in our food relationship. 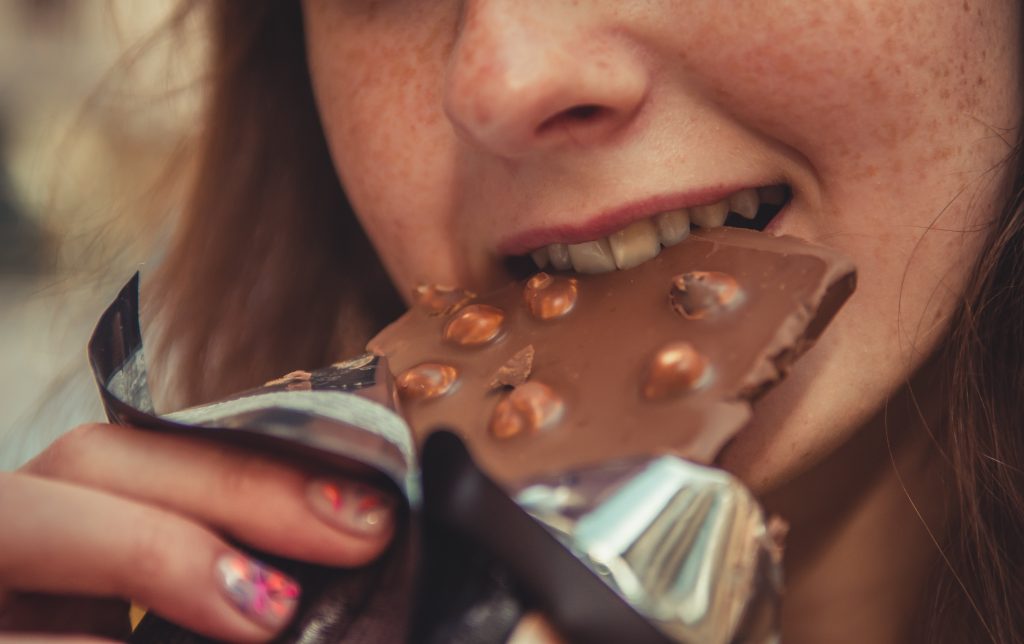 Emotional Eating Definition – Emotional eating is eating as a way to suppress or soothe negative emotions, such as stress, anger, fear, boredom, sadness and loneliness.  Major life events or, more commonly, the hassles of daily life can trigger negative emotions.

(BTW there is NOTHING wrong with having pizza in any of those situations!)

However, studies actually show us that intuitive eaters emotional eat less then dieters!  Why?  Well, when you give yourself unconditional permission to eat all foods, emotional eating tends to not feel as satisfying as it once did.

For many emotional eaters they tend to restrict foods like dairy or gluten all week long.  Then when something particularly stressful or emotional happens, guess what they want?

When we give ourselves permission to eat all foods whenever, this helps us not require these foods when we are emotional! 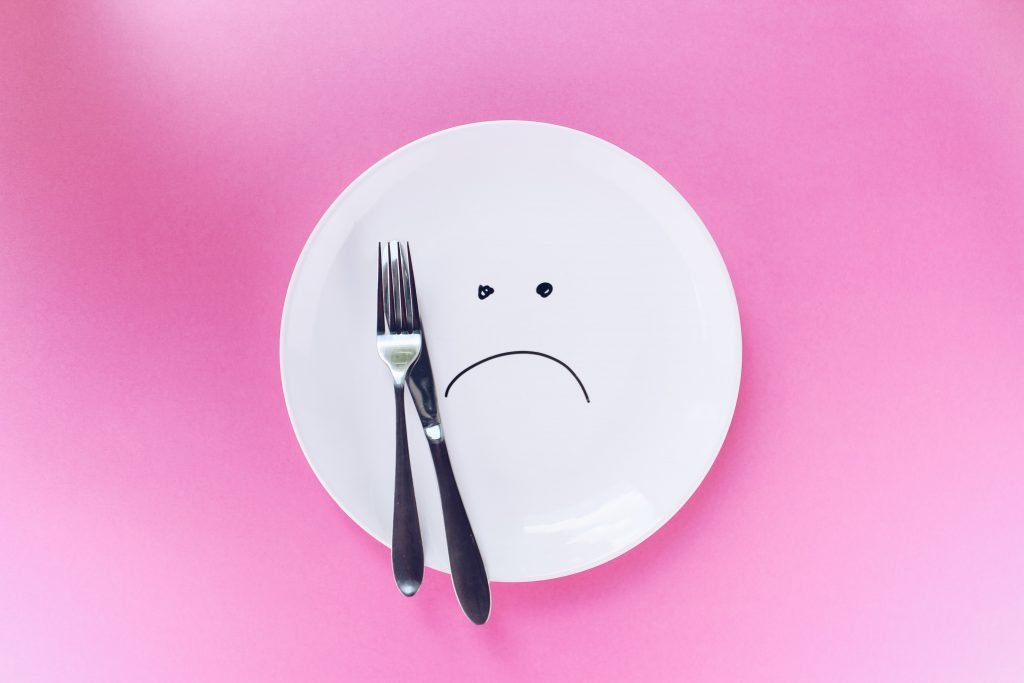 What is Disordered Eating and how does it differ from Eating Disorders? – “Disordered eating is used to describe a range of irregular eating behaviours that may or may not warrant a diagnosis of a specific eating disorder.  Eating disorders, such an anorexia nervosa, or AN, or bulimia nervosa, or BN, are diagnosed according to specific and narrow criteria.  This excludes a majority of people suffering with disordered eating.  Many individuals with disordered eating symptoms are diagnosed with Eating Disorder Not Otherwise Specific, or EDNOS.  However, similar to AN or BN, EDNOS has specific criteria that must be met in order for the patient to receive this diagnosis, and that criteria also is narrowing”. – Academy of Nutrition and Dietetics

Intuitive eaters tend to experience less disordered eating.  This one hits home for me.

Back when I was a chronic dieter, I was the definition of disordered eating.

I would be prescribed or recommended my new diet, take the next few days to throw out hundreds of dollars of food from my kitchen that was now “bad food.”

I would then make the lists in my phone of my food rules, my “yes” foods list for healthy eating & my new “no” foods lists.

I would then let my husband and my bestie know that this is what I was now diving into.

And I would dive in.

For as long as I could.

And then I would throw my hands up and binge.

Guess what came next?  Intense shame and anxiety in regard to what I had just done.  I was convinced it was my fault.  That I was too weak to commit to these diets.

And so, the cycle of restrictive eating would start again.  “Tomorrow I will be fully, 100% committed!”

It was incredibly disordered and incredibly unhealthy. I didn’t know how to have a healthy relationship with food.

But I had severe disordered eating.

Intuitive eating helps people who are in situations like I was in.  Studies show that intuitive eaters experience less disordered eating! 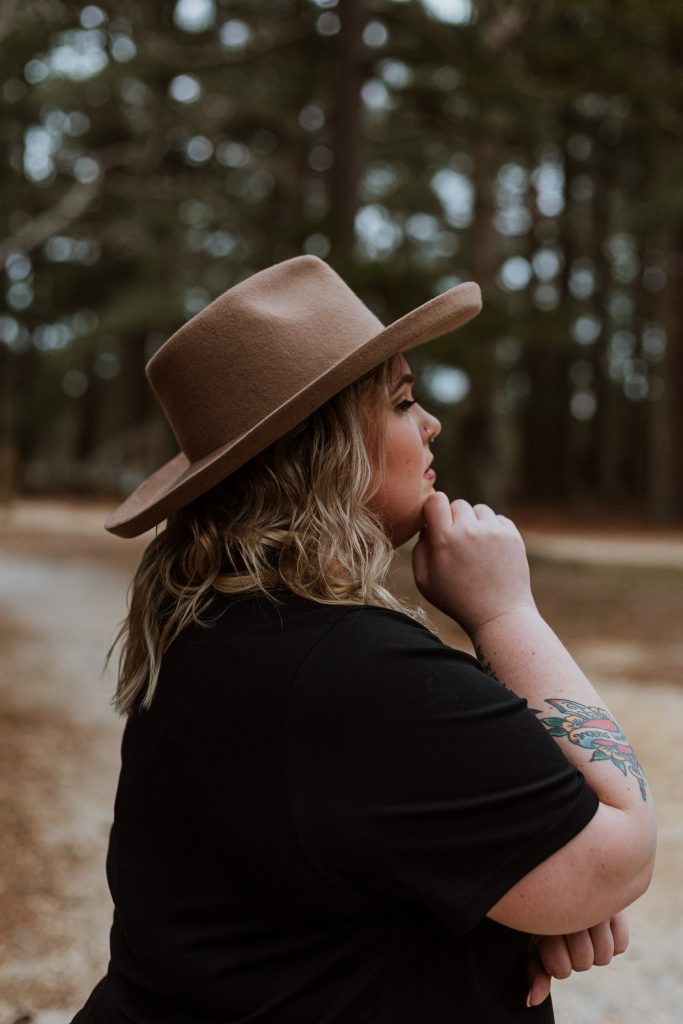 Have you ever heard of self-silencing?

What is Self-Silencing? – “Repressing one’s feelings when they might threaten relationships or one’s security and appearing outwardly agreeable while inner feelings grow angry and resentful.” – Dana Jack, a professor of psychology at Western Washington University

Dieting continually puts you in the position of having A LOT of negative feelings that end up being suppressed my health professionals, nutritionists and even yourself.  Meanwhile anger and resentment are boiling on the inside.

Intuitive eating is all about changing your relationship with food.

Intuitive eating tells you that your voice matters.

Intuitive eating tells you that you aren’t alone in what you’ve experienced.

Intuitive eating tells you that diet culture is the enemy, not your body.

Intuitive eating tells you that you can be healthy at your current size.

Intuitive eating tells you that you are worthy exactly the way you are.

Intuitive eating tells you that it’s not your fault that the diet failed, it’s diet culture’s fault.

Most of my clients come to me with issues in self-silencing.  This is something we work on together through intuitive eating as we dismantle diet culture in their lives!

Could you Benefit from Having Higher…

Intuitive eating can help you have higher life satisfaction. Incorporating holistic healing, it can help have higher unconditional self-regard and psychological hardiness.

Intuitive eating can help you have higher proactive coping, pleasure from eating and interoceptive awareness.

Intuitive eating can help you have higher HDL which is the good cholesterol, body appreciate and acceptance.

Intuitive Eating is truly the perfect melting pot of mind & body health.  It promotes holistic health and wellness. I mean, who couldn’t benefit from these incredible things that intuitive eating could potentially aid you with?!

Have you Seen Yourself in this Blog? 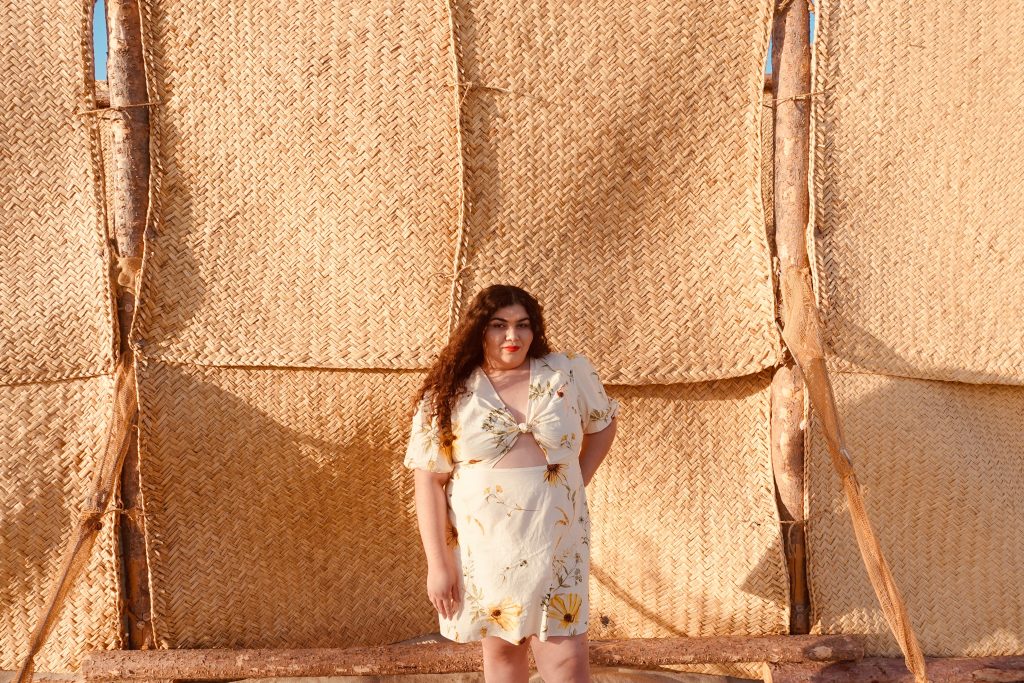 Maybe while reading this blog, you’ve continually thought, “damn, that’s so me.”  Or “wow, I could use some of that in my life.”

Maybe you’ve dieted for at least a decade on and off or you know that you are subconsciously still listening to food rules.

Maybe you have a yo-yo relationship with food.  One day you are “on” when it comes to your diet and the next day you are saying “screw it, I’ll dive back in tomorrow.”

Maybe you’ve been on a diet that has “worked” for you in the past, but you just can’t seem to stick with it.  You beat yourself up continually because you are convinced that it’s your fault.  You know this unhealthy relationship with food needs to change.

Maybe you continually find yourself “cheating” on your diet and are constantly looking for the next most flexible diet to invest in.

Maybe you’ve tried all the diets and still never been satisfied when it comes to your relationship with food.  You always feel like something is missing.

More on that below!

If you and I were sitting in the same room right now, I’d pull my chair in closer, look you straight in the eyes and tell you the truth: you don’t have to live this way. Your life is so much more expansive than a diet to abide by or the size of your pants

I’d also tell you that you have the ability to…

If you hadn’t already guessed it, those are the 10 Principles of Intuitive Eating.  The 10 principles I work through with my clients as we work to heal their relationship with food and free them from diet culture once and for all.

Eating intuitively has completely transformed my life.  You can read more on that here.  And it’s transformed so many of my clients lives as well.

I now help women feel at peace around food once again and heal from disordered eating, click here and see if what I have to offer may be a great fit for you!

Until next time, happy healing!

*To read more about the science behind intuitive eating, read the book Intuitive Eating, A Revolutionary Anti-Diet Approach (specifically pages 1-18 which is titles, “The Science Behind Intuitive Eating”) by Evelyn Tribole, MS, RDN, CEDRD-S and Elyse Resch, MS, RDN, CEDRD-S, FAND.  I had the privilege of being mentored by these women when I became certified in intuitive eating and highly recommend reading anything that was written by them!

WHAT IS GENTLE NUTRITION?

HOW TO COPE WITH YOUR BODY IMAGE THOUGHTS WITH COMPASSION

Serving people around the world from Canmore, Alberta